Effective medications have drastically transformed health outcomes for those of us living with HIV.

We can now expect a lifespan that approaches that of the general population. Individuals can be diagnosed with HIV along different stages of HIV infection.

For example, these days it is common for folks to be diagnosed HIV-positive within weeks of infection, but also similarly common for folks to be diagnosed at very late stages, when the risk of serious infections or death can be very high. Of course a number of institutional, personal, and social factors can contribute to these varied outcomes. People can also progress through the various stages of HIV infection at different rates, with some folks so-termed “rapid progressors” seemingly developing to AIDS within perhaps 2 years. In contrast, some folks seem to progress very slowly or not at all, and are so-termed “long-term nonprogressors” or “elite controllers”. Here I provide a brief summary of the stages of HIV infection. 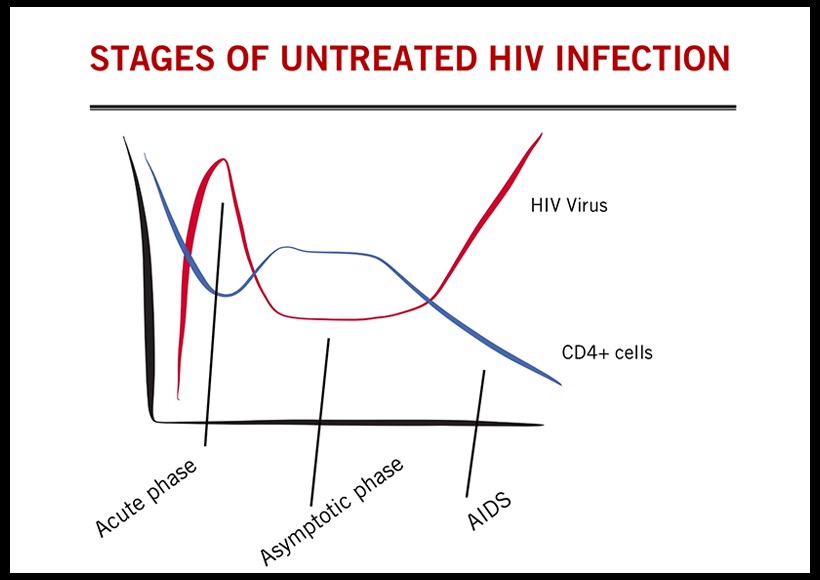 When a person is exposed to HIV through the bloodstream or a mucosal site (such as during sex), there is a chance that the virus can take hold. Using the body’s white blood cells (CD4), the virus can start replicating at the site of infection within a few days, and soon after spread throughout the body. In the process the virus hides or establishes “reservoirs” in some cells in blood, lymph nodes, brain, and intestinal tract.

These HIV reservoirs are part of the reason it is so difficult to cure HIV infection.

This acute infection stage is also characterized by a strong immune response in which the individual’s body tries to fight the virus.

This is called “seroconversion”, and is when antibodies begin being produced by immune cells, and an HIV antibody tests will begin showing a positive result. Many people experience flu-like side effects during this stage, around 2-3 weeks after initial exposure.

Symptoms often include terrible night sweats, fast heart rate, and extreme fatigue. This is the stage when the amount of HIV in someone’s blood, or their “viral load” is extremely high, making them more likely to pass the virus on to others. A drastic dip the blood CD4 count – a measure of immune health – is also typically seen at this point before a partial rebound to what is known as the “CD4 set point”, which begins the next stage.

About 6 weeks after HIV infection, a stage with no signs or symptoms, known as the clinical “latency” period. During this stage there is a very slow reduction in the number of CD4 T cells with time, and an associated gradual increase in the amount of HIV particles in the body. The majority of people remain in this disease stage for about 10 years in the absence of treatment, and most people with treatment access do not progress beyond this stage.

This stage typically starts at some point after the blood CD4 cell count drops below about 200 per microliter (very low!), and is characterized by a more rapid increase in the amount of HIV in the body. The immune system is so depleted in this phase that a number of infections and cancers can emerge that are normally well-controlled by an intact immune system.

These so-called “AIDS-defining illnesses” include such things as cervical cancer or pneumonia. Many of these illnesses have been closely tied to the history of HIV/AIDS-related stigma that persists today in different forms, such as black-ish purple skin cancer or blindness from CMV retinitis.