In this edition of Q5 with Muluba, CANFAR Youth Ambassador Muluba Habanyama gets acquainted with CANFAR Board member and long time supporter Leeanne Weld Kostopoulos.

Leeanne founded CANFAR’s first young volunteer group The Junior Committee, and currently sits on CANFAR’s Board of Directors. Muluba met with Leanne in her Toronto home to take a trip down memory lane. 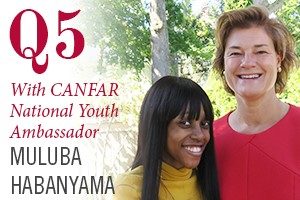 1. You have so much history with CANFAR. How did you get started with the organization?

That’s a long time ago now! 1987 – I had just finished my first year at university. Bluma Appel was a good friend to both me and my mother. Bluma was waging war on AIDS, and getting people to recognize the economic impact that HIV would have on society. She wanted anyone and everyone to join her crusade. She sat me down and told me my age group (I was 19) would be most affected and we were doing the least ourselves. She asked me what I was going to do about it. So I said maybe I will throw a party! And that was the beginning of the Eight Ball. The Eight Ball was organized by the Junior Committee, of which I was chair. We ran the Eight Ball for 10 years, raising a little over a million dollars. It was followed by a few other parties and events.

2. Thank you so much for starting that – you are the first generation of young supporters! Your relationship with CANFAR has continued, it seems like you have never left! You worked for CANFAR, and now have continued as a board member, an event attendee, and a donor. Can you tell us more about your involvement?

When I was in university, we were getting the information out to other students. Then, I was actually hired as an employee for a few years, working on the Have a Heart program. We focused on raising awareness: if you had the information, you would hopefully act. Our goal was to make people aware of what was going on. I’m very proud of being involved with CANFAR. It’s been a long time, and I hope that continues in future years! I want to see the organization to continue to grow and do well.

3. Do you have a favourite moment in your all your years with CANFAR?

Oh, there are a lot of stories! These people in these photos are still my very close friends today – we grew up together. I used to host the meetings at my house. We all worked in different industries, and we all individually pulled on our contacts to make it happen. Everyone was really trying to figure out where they had someone who could get a donation or sponsorship for an event. We worked hard, but it worked out well! And many of the Junior Committee members have continued their involvement with CANFAR today.

4. Incredible stories, incredible work. Why do you think research is important?

HIV is not in the news or in people’s consciousness – they think it’s over. But it’s not over. We need to continue to fund research to find a cure. People are living well, leading long and healthy lives with HIV. But we do want to be rid of HIV. We want to wipe if off the earth.

5. What advice can you give 30 Under Thirty, the current generation of young volunteers?

For us – it was fun! Fundraising is a lot easier when it’s fun. The Eight Ball was the party that people wanted to attend! All the people you wanted to see were there, it went late, and it was a really good time! Organizing it was a lot of work, but also a lot of fun. The result of anything is always better when you enjoy the process. My advice is to do something you feel strongly about and will enjoy putting together.